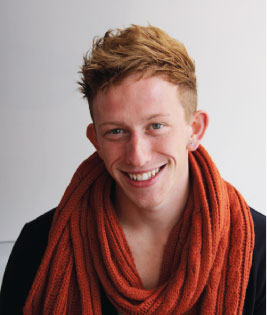 I grew up in Launceston and went to Summerdale Primary School before going to St Patrick’s College for years 7 to 12. I come from a family with no religious affiliation at all and until I began studying at St Pat’s in 2000 I had had no exposure to Catholicism. I still remember on my first day trying to figure out what everyone was doing when they were making the sign of the cross during Morning Prayer. I decided that I wanted to go to St Pat’s because it offered better facilities, programs and opportunities than my local public high school and thankfully my parents agreed!

I was always very much into academics, but it was only during my time at St Pat’s that I discovered my love of performing arts. A definite highlight for me was playing lead roles in the three musicals that were produced during my time there, including Cinderella, Oliver! (in which I played Oliver) and Joseph and the Amazing Technicolor Dreamcoat. St Pat’s had such a vibrant and supportive arts program and I loved getting involved with all of it including the choir ensemble, music camp, rock eisteddfods, talent nights, as well as studying art, dance and drama. Jules Colman was one of my most influential teachers, who gave me continual guidance and support and in fact still does to this day.

As well as my involvement in the arts I also focussed quite strongly on my more academic studies. My group of friends and I were all quite competitive with marks and it was definitely a positive driving force. I particularly enjoyed English and Psychology, which was taught to me by Ian Murray, a man I have the utmost respect and admiration for, for his incredible wealth of knowledge but also his wit and humour. By the time I graduated I had no plans for a career in the arts and had set my sights on studying languages to become an interpreter and after gaining a TER score of 96 I was accepted in University of Melbourne. At the last minute I turned this down to pursue my artistic interests.

I had always been interested in acting, had attended NIDA workshops and in Year 12 was awarded a scholarship by Bell Shakespeare in Sydney to work with them for a week. My first exposure to dance was studying the subject in Year 12, which I really enjoyed and that year I received the highest score for the subject in the state. I ended up using the first two years out of college to work and figure out what I wanted to do, which was incredibly valuable. In that time I also started a youth group called DRILL and began choreographing my own dance productions with other young dancers.

In 2008, with mostly only my own self taught training and 12 ballet lessons I was accepted into The Victorian College of the Arts in Melbourne to study dance full time. Since then I have been working as a dancer, choreographer and producer in many different contexts. I am the Artistic Director for the now fully formed youth dance company DRILL, based in Hobart and have choreographed 5 full length works for the company, 2 of which have been nominated for Australian Dance Awards.

I also received a Regional Arts Australia’s Volunteer of the Year Award in 2010, the Bokprint Arts and Cultural Award and the Premier’s Young Achiever of the Year Award in 2014 for my work with DRILL. I have worked regularly with Tasdance to deliver and choreograph a number of their youth and community projects. I am the Producer for Melbourne’s youth and pre-professional dance company, Yellow Wheel, for which I just choreographed a work to appear in the Melbourne Fringe Festival 2014. I am also the Festival Director of Short+Sweet Dance Festival (Melbourne and Sydney).

I have been fortunate to receive a number of grants and opportunities to support my work and professional development including an ArtStart grant which allowed me to travel and dance in Europe for three months in 2012 and most recently an Asialink Residency to spend 6 weeks working in Sumatra (coming up in September). Right now I am working in Hobart on DRILL’s next project, Radical Kid, which features just over 50 local young dancers.

I really value the education I received at St. Pat’s and have so many fond memories of my time there and the people I shared it with. I think it not only prepared me to be proactive, organised and determined, but it also taught me a lot about compassion, empathy and embracing new perspectives.